One last word before the year is finished...

We didn't go to the gun show.  (SCORE! - oops, did I say that out loud?)  Truthfully, though, I've only managed to postpone the inevitable - we're going on Sunday.

It was beautiful today - the temps got up over 60!  We decided to take advantage of the unseasonal warmth and took Finn to the dog park to run and play.  (I took pictures, but I'm still not used to my camera and so none of them are worth posting.) 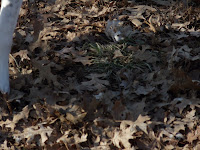 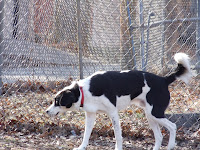 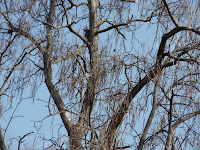 
When we got home, Jimi went down for a nap and Finn and I took a nice long walk down Southern Parkway.  (Finn had gotten his exercise, but I'd not yet gotten mine.)  It sprinkled briefly a few times, but nothing substantial; the weather mostly just stayed awesome.  It still is.

Our party plans for the evening have been scrapped, as well.  (Act surprised, I dare ya!)  There was already one strike against the idea:  the simple fact of driving around on New Year's Night.  People are dumb and do dumb things a lot, but on nights like tonight, there's an extra dose of dumb in the air and on the roads.  Next, looks like Jimi's starting to get a cold, so there's strike two.  The beautiful weather is supposed to turn to shit right about the time we'd be leaving for home, so there's strike three.  And so I picked up some mixers and we'll have our own little celebration* at home.  Jimi apologized for letting me down.  I told him to stop being stupid; when given a choice, I'll always go for the option that allows me to not wear a bra.  Besides, I'll still get my kiss at midnight.

Tomorrow we're ringing in the new year with a visit to my brother.  I missed out last week, lame as it may be, because I was hung over and honestly didn't feel that I could make the 8 hour trip.  (3 hours down, 2 hours to visit, 3 hours home - too many hours)  I miss my brother.  It will be good to see him again, though I wish the circumstances were better.  His head seems to be in a good place, though, so perhaps things WILL work out for the best this time around.


I'll forever be the optimist.
I painted yesterday.  I'm going to do it again, maybe even tonight.  My problem is I don't know what in the hell to paint.  I'm not good enough to paint actual "things" - my pictures need to be abstract, or at the very least, an intentionally vague representation of the thing from which they're modeled.  Since I can't figure out what to paint, I decided I'll just paint anything.  Whatever shows up when I put the brush to the paper.  I'll figure out where I'm going with it eventually.  Right?  If not, I've already paid for all the supplies, years ago, so it's not like failure would actually cost me anything.

I think I mentioned I want things to put on the walls.  I've gotten on a kick, and the end result is going to mean me taking pictures of lots of things, having large prints made, then sticky-ing them up on the walls all over the house.  Who needs frames?  No frames means I can change them out more frequently.  (I'm sorry I'm so tacky.  I can't help it; it's part of the fabric of my being.)

I realized I left off my list of 2011 resolutions the biggest resolution of them all:  I'm really, actually, finally going to stop smoking, starting midnight tonight.  I've got 4 cigarettes left in my last pack, and they'll be gone by midnight, even if it means breaking them in half at the stroke of midnight.  I'm done with this monkey on my back; I'm done with the coughing, I'm done with spending the money, I'm done with stinking, I'm done with upping my risks of heart disease, heart attack, stroke, cancer, emphysema, infertility.  I never meant to start smoking in the first place, and for the first - oh, I don't know, 5 years? - I convinced myself I could quit at any time.  Then I started trying to quit and learned otherwise.  It's been 12 years.  That's too many years, and I don't want to spend another day as a smoker.

So there ya go.  I'll tattle on myself if I cheat, and I expect (please?!) that you will all give me holy hell each and every time I slip up.  I need to do this for me, but a little encouragement never hurt, you know?

I'm going to go fix another drink and smoke one of those last 4 smokes and watch this Trailer Park Boys movie Jimi's got on.  (Have you seen this shit?  It's ridiculous.)


Happy New Year, Friends!
I hope 2011 is kind to you and yours,
and brings you happiness and fulfillment in all things.

*celebration = Sitting in front of the TV, watching Twilight Zone or something on Netflix, me on the computer, him curled up with the dog, the cat in front of the space heater.  But our cups will be full.  And love and happy will be in the air.  And then we'll set off bottle rockets at midnight and hopefully not set our neighbors' houses on fire.
These boring thoughts brought to you by Natalie at 8:24 PM