It's fun to stay at the YMCA

The Fowler Family joined the local YMCA today.  YAY!  I've only been talking about doing it for 5 years.  I've ordered a fancy-pants pedometer, too.  And I went to the grocery earlier by myself and didn't buy ice cream, though I intended to when I walked in.  This is my year to change my habits, yo.  I'm going to make better choices.

Geneva is sleeping in her swing and that makes me feel like a bad mom.  I think I just heard her make a noise, so i'm going to go get her.  G'night!
These boring thoughts brought to you by Natalie at 9:47 PM No comments:

It's a good life.

I used to worry constantly about what others think of me - from my earliest memories as a child, through high school, in the workplace, then on the internet.  Then I met Jimi, and he loved me in the purest way a person can love another person who isn't their child - just as I am - and I stopped giving so much weight to the opinions of others when it came to forming my opinion of myself.

Still, from time to time, I find myself wondering what my image is for people who don't know me in real life, anymore or because they've never met me.  I wonder what my ex-husband thinks of my Facebook profile, for instance.  He sent me a friend request the day after I learned I was expecting Geneva - so he's been privy to my life after him only during the period of my life that's been full of the most awesome things.  I sort of love that fact, I can't lie.


I lost my train of thought and clicked away to some other internet time-suck.  There was nothing good on.  I remembered my unspoken/unwritten resolution that is somewhat hazy and undefined but was something like blogging more and not leaving a million drafts hanging out there in the nether with two paragraphs and no ending.  So fuck it.  I'll come back and blather on some more until I've posted enough words to count as an entry and post so I can move on to more important things, like making lists and not doing the dishes.


Here's a picture of me and Geneva, from our photo session a few weeks back: 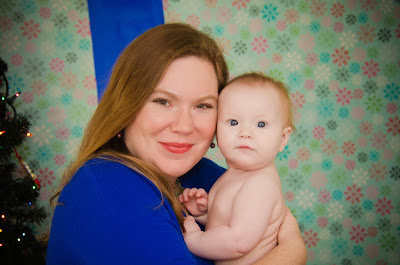 Isn't my girl beautiful?  Oh, I love her so much.  It's after midnight; she's 10 months old today.  Time flies.


I'm sure I had bigger things to say, but I don't have the words available now.  Maybe tomorrow.  Sweet dreams.
These boring thoughts brought to you by Natalie at 12:29 AM 2 comments:

We were watching a movie at midnight - we knew it was midnight because we heard the fireworks being set off by our neighbors.  Not our direct neighbors, but those other unnamed, unknown neighbors.  The ones who let off fireworks and shoot guns at midnight on New Year.  Also when the local football/basketball team wins a championship.  Or a game.  This is the South End, after all.

We heard the fireworks and we said Happy New Year and we kissed and we went back to watching our movie.  We'd bought a bottle of wine and a bottle of champagne to celebrate - the champagne was never opened and the wine, well, I had one glass, then poured another and kept the bottle out in anticipation of having a third.  This morning, the second glass was still there and so was the bottle, warm now of course.  I put it back in the refrigerator anyhow.  I'm drinking it now, in fact.  Mixed with some of the champagne.  We never did ding our glasses together.

I accomplished everything on my list today.  Well, everything but one thing, and I hadn't really planned on doing that today anyhow, so I'll call the whole list complete, and that's a great way to begin a new year.  My list included things like dishes, laundry, vacuuming, but also fun things like taking a walk and pushing Geneva on the swings at the park.  And I'll be honest, I'm at a point in my life where things like dishes and laundry and vacuuming are fun because I can make Jimi keep an eye on the baby while I do them, and also because they get my house cleaner and it feels so good to have a clean house.  At least, I'm pretty sure I remember that it felt that way.

I have 2600 pictures on my phone and can't bring myself to delete them even though they're backed up on the computer.  And Facebook. And Instagram.