Awesome and exhausting, motherhood is

Blog titles since Geneva's birth have been her age in weeks/days - it's been long enough since my last post that I've lost track of exactly how old she is.  28 weeks?  Something like that.  I'm an awesome mom.

Life is busy.  There's not much time these days for much more than what has to be done, and blogging hasn't fallen on that list in quite some time.  My carefree days full of hours of nothing to do and no plans has become a life so full that sometime I feel like I need to add "shower" and "make coffee" to my daily to-do lists so I can make sure I find a way to work those important things into the day.  (Plus, I really like checking stuff off on my to-do lists, so I find adding simple things like "shower" and "make coffee" gives me a boost, because I know I'm going to get those things done.  Fuck cleaning the floors, but momma needs her coffee.)

Geneva is amazing and I'm going to regret terribly the fact that I've not recorded every moment of her life here, so I can go back and read it all later.  I already miss the tiny bundle she was while I was home on maternity leave - she's changing so fast every day!  I spend her awake hours playing, singing, dancing with her, between the feeding and the changing and the bathing.  When she's asleep, there's laundry and dishes and dinner and maybe 20 minutes for yoga and 10 minutes for Facebook.  The day is over before I know it, even when it starts well before dawn.

She's still my little milk baby and I don't even have the words to describe how proud I am of her little fat rolls on her legs, ankles, and wrists.  At her 6 month check-up, she weighed in at 16 pounds 10 ounces and was 26.5 inches long, and I was sort of disappointed they didn't throw me a party or at least offer me a sucker - I mean, I've been growing this little lady for well over a year now, and look at what a great job my body has done sustaining her!  I'm in awe of my body - I'm in awe of her, and the fact that she came from me, and that I'm able to keep her strong and healthy.  What an amazing experience motherhood is.

I love breastfeeding, and I'm so glad we've been successful at it.  I hate pumping.  I tip my hat to mothers who pump exclusively - that's some dedication I don't know if I possess, and I'm grateful I didn't have to find out.  Because the awkwardness and discomfort aren't enough, it also is time-consuming and has made my job so much more difficult.  I'm less productive because of the interruption two to three times a day, and my co-workers are resentful because of my unavailability during those times.  I also suspect they secretly believe I'm kicked back with my feet on the desk, taking a short siesta while my milk flows - in reality, I'm hunched over with an elastic band strapped tightly across my chest, chapped nipples peeking through holes in the fabric to be fed into plastic cups that pinch and pull at the delicate skin, bare back covered in goose bumps as the AC blasts and my shirt lies wadded on the corner of the desk while I try to sort my pile of billing without moving too much (don't want to spill anything from the bottles dangling from my tits), hoping to accomplish something during this 20 minute torture session so I don't get further behind and have to stay late or take work home.  And then, when it's over and I emerge from my cave with my bag of milk and nearly-obscene bottle/flange contraptions coated with milk droplets, I'm greeted with "It's about time!" and "Finally!" and "Oh, she just came out, hold please and I'll get her on the line."  Pumping is a fucking party, let me tell ya.

Nearly seven months in, I've managed to keep up with her demand pretty well, but I have next-to-no stash of extra milk.  Patricia (a friend I've known forever and Geneva's Other Mother/Babysitter during the workweek) has maybe two days' worth in her freezer, and I have four bags in mine.  So yeah, not much milk stored up.  It's a constant worry for me, and I'm stingy with that expressed milk the way Scrooge was tight with a penny.  But we're making it, and we're going to keep getting by.

She's just starting to learn solids.  I don't know what in the hell I'm doing or how to feed her - she's trying a bit of this and a little that, a mix between jarred babyfood I swore I wasn't going to give her and chunks of things we have around - like banana, avocado, peaches, lemons.  She really loves the purees and happily takes the spoon into her own hand and guides the food into her mouth on her own.  The chunky foods seem to be more for holding and squeezing than actually eating.  When the chunks do make it to her mouth, she never seems glad they got there.  She still hasn't had cereal of any sort, and I've got no plans to change that any time soon. 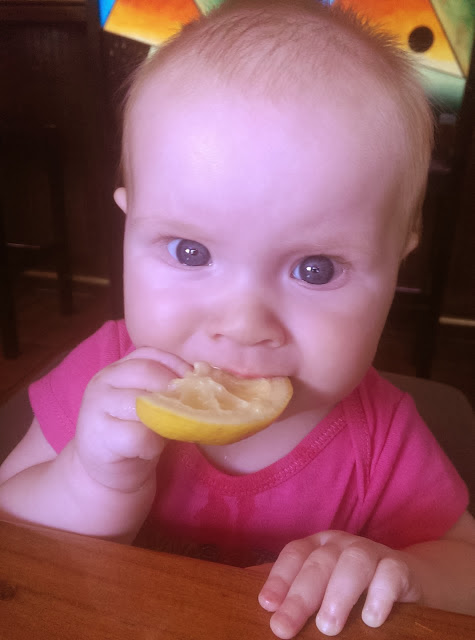 She sleeps pretty well these days - nursing to sleep around 8, then up again for a nightcap at 9, then one more meal in the middle of the night, around 4:30.  She'll sleep on her own until 7, and if it's not a workday, she'll go back down until 9:30 or so.  (That's why I've found the time to write this morning.)  On weekends she takes two good naps, about 2 hours each, but I think she has a hard time staying asleep that long during the week.  (Other children - and shiny things - are incredibly distracting, and she doesn't want to miss anything.)

She is so sweet.  She's so good.  She laughs and coos all the time.  Her smile is radiant.  Her eyes are such a magnificent blue, and so wide and deep.  You can see her brilliance.  Her hair is starting to come in more fully, but we still can't tell what color it will be.  Strawberry blonde seems the most likely contender here lately.

She sits up and plays quietly with her fabric vegetables and fruit, or will bang wildly on her little baby piano.  She's not quite crawling, but she can get anywhere she wants to be by throwing her hands forward and pulling herself, using her feet to push forward.  She'll get up on her hands and knees, but hasn't figured out yet that putting them one in front of the other will move her more quickly.  Last night, she started pulling herself up onto her knees using the edge of her crib - time to lower the mattress, methinks.  Bath time is still her favorite - she loves to splash! 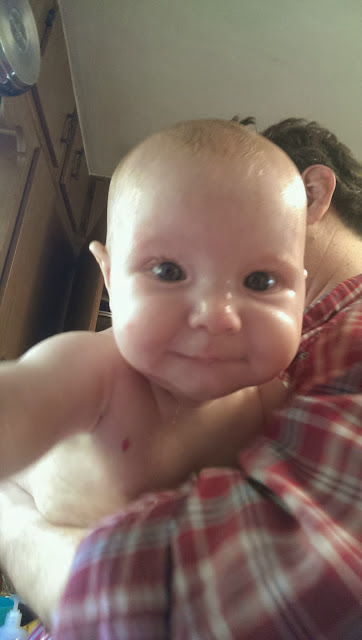 She loves everyone she meets, and most often has a beautiful gummy smile to share.  (No teeth yet.)  She recently started testing us, seeing how we react to certain screams and demands.  I think we're still winning, so far, but she is a clever girl, and we're going to have to stay on our toes with this one.  It's going to be hard to not spoil her - I want to give her the world.

Jimi and I celebrated our one year wedding anniversary.  He's a great husband, and an amazing father.  Geneva and I sure lucked out.  A woman told me once that if I wanted children, I should hurry up and have them, but not to expect any help from Jimi, because he's lazy and wouldn't be there for me.  Sometimes I wonder if he's so involved because he knows that accusation was made.  Mostly I think that woman just didn't know Jimi and was running her mouth because she was a sad lonely person who didn't know how to say anything good about anyone.

I can feel my free time running short, and I really need to heat up my coffee - I've had less than half a cup and let it go cold.  I miss you, bloggy world - I want to say that I'll try harder to come back and do this more often, but we've all heard that before and know that it's probably not true.  It sounds nice, though. 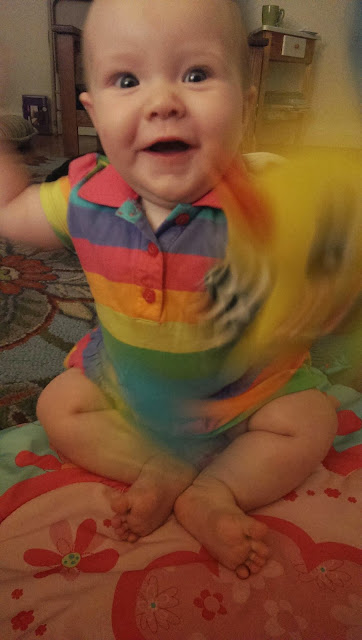 These boring thoughts brought to you by Natalie at 9:02 AM 1 comment: