For a vacation day, it's awfully early.

I set an alarm and woke up at 6:30 a.m. on my day off so I could get a head start on the day; have a cup of chai, watch the news, and, most importantly, get my billing done so I can put any and all working behind me until next week.  I got out of bed, fed the cat, let the dog out, started boiling my water, turned on the news and learned that apparently there was a big snow storm in the northeast this weekend, clicky click to log on...

...and the company servers are down for maintenance for at least another hour.

So much for getting a head start.  Oh well.  I'll just sit here and drink my tea and watch all the bad that's going on in the world.

I had an idea once for a "news" station that only reported good news.  For example, on the Early Show just now, they did a spot on a calf that got stuck on an ice-covered pond.  The local news chopper came around and used the wind from the blades to get the calf scooted close enough to shore that it could crawl to dry land and safety - on my news station, it'd be that sort of story, all day, every day.  The world needs a place it can go for happy, you know?

I love my new camera.  As evidenced by my previous post, I'm enjoying taking pictures of just about everything, even questionable Brie.  I've been without a camera so long - it'll be nice to not think "~sigh~ That'd make a good picture; wish I had a camera" as I look around me.

We got a waffle maker for Christmas.  Think I could make a bunch of waffles and then freeze them?  Can you pretend they're an Eggo and reheat them in the toaster oven?  Cause that would be sweet.  I think I'm going to try it.

Did I mention I'm enjoying the new camera?  Here's a picture of Q the Cat: 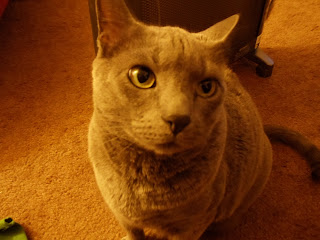 I've still got 20 minutes to kill before I can log on and do my work.  I've lost my motivation, but it must be done by 11 a.m., so it doesn't really matter what my motivation level is - the work must be done and that is all there is to it.  Bleh.  I keep reminding myself that it's all vacation all the time as soon as I'm done here.
I ate the cheese last night.  It tasted really good, even if it did make my hands smell like puppy breath.  No ill-effects that I have detected so far, so I'm going to assume it's supposed to look like that and that the mold isn't that big of a deal and if that's not the case, I've decided I don't want you to tell me about it.
I'm jealous of the snow in the northeast.  It's been a lot of years since we've had that sort of snowfall here in the Ohio Valley, and man o man, how exciting when we do get it!  I know it's a pain in the ass and it causes nothing but trouble for a lot of people, so I guess it sort of makes me an asshole when I say 'but it's so much fun! and it's so pretty!'.  Sorry.  I don't mean to be an asshole, I just really like snow.  That's one of the few things I miss from the 3 winters I spent in Michigan; but then again, it didn't really shut things down up there the way it does down here, so most of my memories of lots of snow don't involve much inconvenience.  There was that one time when we got 6" in 2 hours; that caused some problems on the roads and it took 3 hours to drive the 20 miles home that afternoon.  And there was that time we got that huge ice storm and the world was shut down for 3 days; the electric was out and it was 40 degrees in the main part of our apartment, but our water heater was gas, so after spending our days huddled together under a blanket playing cards, the ex husband and I ran the hot water in the shower in our master bathroom - the steam knocked enough of the chill from the air that we were able to get to sleep and being under every blanket we owned meant we could sleep through the nights without shivering.  But ice storms are a horse of a different color and happen here too, and to be frank, fuck some ice.  Ice is an asshole.
But maybe I should shut up.  It looks like they really got slammed up there.  And damn, the poor people stuck in the airports.  I wouldn't wish that on anyone.  I just want snow, man.  Just a little?  Maybe just on my yard?
Gas is $3.15 a gallon here this morning.  As if I needed more encouragement to not leave my house.
Jimi marinated some beef for jerky last night, and today we'll be trying out that new dehydrator for the first time.  How exciting!
It's now a quarter after 8, and I still can't get on the server.
And I'm hungry.  Very hungry.  We need milk.  Being low on milk or !gasp! out of milk makes me feel so limited in my breakfast options.  There's not enough milk for cereal, and while there's enough to make oatmeal, there's not enough for a glass to drink.  Who can eat oatmeal without a glass of milk on the side?  Crazy talk.  I could fix an egg or two and some bacon and toast, but gosh that seems like a lot of work, and besides, then we're back to that whole not enough milk for a full glass and that's lame.
Good Lord, am I really blogging about my breakfast dilemma?  I'm sorry about that.

These boring thoughts brought to you by Natalie at 8:27 AM

Email ThisBlogThis!Share to TwitterShare to FacebookShare to Pinterest
Labels: food, My Blog Is Boring, Q the Cat, work