I'm going shopping with Momma this morning and I'm going to be late because I'm doing this instead of putting on clothes or drying my hair.

ICLW is awesome.  Despite my trepidation that I'd waded into someone else's swimming hole, I've been welcomed to the party with open arms, kind words, and well-wishes.  There are some pretty amazing women out there in the bloggy world.

And what's up with the full moon this month?  Did it get like the whole world knocked up, or what?  Seriously - I think I've found eleventy hundred new blogs this week, and every other one is (tentatively) celebrating a BFP.  (Big fat positive - as in, on a pregnancy test - for those of you not in the know.)  Six months ago, I would've been tempted to chuck the laptop out the second floor window, but today?  It's super exciting and gives me hope that it'll be my turn one day too.

Jimi moved our hanging-out area to the upstairs this week because if he didn't our house was going to burn down and kill us all.  No, really.  The outlets in the front bedroom where we'd previously housed the TV and such were all old-school, with no third hole for the big plugs.  (I don't know what any of this shit is called - do you know what I'm talking about anyhow?)  We'd been using an adapter - it plugs into the two-hole plug and then has a 3-hole outlet on the side facing out of the wall.  Into that, we'd plugged our surge protector (I realize, in retrospect, that this was a horrible idea), and into the surge protector, we'd plugged everything else; TV, Blu-ray player, stereo, humidifier, space heater.  (The space heater scared the fuck out of me regularly, because the cord gets so hot the plastic on the plug becomes pliable, so for the last few weeks, I'd unplug the heater when it wasn't being used.)

Our internet was out on Tuesday (and not because I forgot to pay the bill this time - it was an actual, legitimate outage in our area.  And the bill wasn't even due yet - I know, I called and paid it just in case.).  I'd left - I had a date with Kimmie to shampoo her bedroom carpet for her; her pup, Casey, hadn't been able to control her bowels or bladder for her last few months, and Kimmie's carpet had suffered for it.  Anyhow, so I was at Kim's, and Jimi decided to reset the modem and the router to see if the issues had been resolved.  When he was reaching back behind the television, he bumped the cord to the surge protector and something crackled.  "That doesn't sound good," he thought, and his eyes fell on the outlet where it was plugged in.  The misshapen, brown, burned outlet.  The outlet that had been slowly melting and charring for who knows how long.  Immediately, he pulled the surge protector plug from the adapter, then the adapter from the wall.  Both were hot, and one of the two prongs on the adapter stayed in the wall - Jimi used a pair of pliers to pull it out. (I'm as shocked as you are that he wasn't electrocuted.) 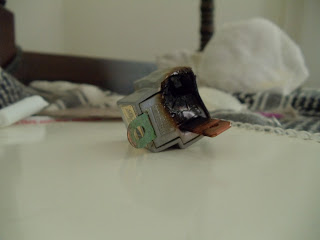 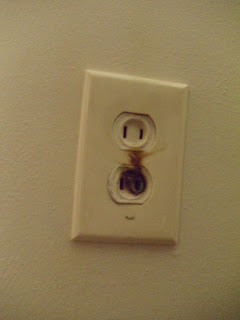 Our house was going to catch on fire and burn to the ground and kill us all any minute.
I'm justified in being scared shitless by this, right?

Obviously, we couldn't keep the television, and blu-ray player, and stereo, and all of our other gadgets plugged into this outlet, or any other old-school outlet in the room.  Obviously, shit had to be moved.  By the time I got home at 9, he'd put away our messes and cleaned the carpets upstairs, moved the television, reconnected the modem and router - he had us set up and ready to go.  Now we've got our chairs and the Jaxx Sac up here, I've moved a plant and a Buddha into the room, and we're all set.  And the plugs up here?  Three-prong.  That's a mistake we won't make twice.

Happy Saturday Friends!
These boring thoughts brought to you by Natalie at 9:44 AM

Email ThisBlogThis!Share to TwitterShare to FacebookShare to Pinterest
Labels: House, ICLW, Jimi, Momma, My Blog Is Boring, things that scare me, This is why I say "Fuck"