From Dark to Light

I started a detailed post about my last 30 hours or so, but then I paused to tell Jimi a story and ended up having a meltdown.

I feel like there's a big heavy wet blanket of sadness hanging on me - but none of it is for me, except maybe a little piece of that breakdown that involved thoughts of "why can't I just be happy and ignore all of this?!"  This whole week has been full of shittiness and awfulness, but none of it is mine, not really.

I haven't watched the news in 2 days, or read the internet for more than a few minutes, so I don't really know what the latest is on the situation in Japan.  NPR has kept me up-to-date on the goings-on in Libya while I've driven to and from work and to and from Kimmie's house, but I haven't yet heard/seen the results of the UN vote that was going to be happening this evening.  Jimi's watching Destination Truth From Iceland on Syfy, and really, I've already had one crying fit tonight - I'm not interested in expending the energy it would take to ask him to find some news.  He's not really watching TV - he's got it on, and he was watching it, but now he's playing Radiohead's Creep on his ukulele - and he's singing.  He's good.  It's like having my own personal minstrel.  Why would I interrupt that for more reality-based terror?

I laid on the floor next to my friend today, and rubbed her back and squeezed her arm and kissed her head while she said goodbye to her faithful companion of 13 years.  I sobbed with her.

This afternoon I got the latest on my brother, and maybe one day I'll be brazen enough to blog about it, but tonight is not the night for that.  Suffice to say there's been a setback with his homecoming plans; it's his own fucking fault; I'm pissed and heartbroken, for him and for my parents.

That's the story I was telling Jimi, the one about the brother, when the waterworks began.  There's just so much sadness, so much heartbreak, so much tragedy, so much helplessness, so much ignorance - sometimes it's all so much.

I'm scared that everyone I love is going to die and leave me (one day, they will, unless I beat them to the punch - and that's a whole another set of fear stories).

I'm scared that Japan is going to suffer a nuclear meltdown and hundreds of thousands of people will be killed slowly over the next 5 decades.  Well, 5 decades - or 2012, whichever comes first.

I'm scared some shit will hit the fan while I'm still thinking about planning to maybe talk about buying some supplies to put together 72 hour kits.  I'm scared that I don't have much in the way of food storage yet; I'm scared that if I build up my food storage it won't matter anyhow because I'm scared we'd have to flee our home.  I'm scared that we don't have enough of an arsenal built up, or piles of boards and windows and foil and duct tape and plastic sheeting to cover all the windows in the house.

I'm scared that we're going to go to war in Libya.  I'm scared of what another war will mean for that region, and the impact it will have on the world.

Life is scary.  Most days I can block out all the scariest parts; I can ignore most of it because it's not all up in my face and touching me and getting its slime on me.  A gradual building up of sucktitude, this week has piled all the worst parts right on top of me - none of them are my burdens, really, but they're all RIGHT THERE, right in my face, and it's just a lot.

But I have Mista Jimi and his ukulele; my personal minstrel.  And we've got our little sanctuary here, where sometimes things suck, but mostly things are pretty awesome just about all the time.  And sometimes, I have to step away from reality, turn off the news and enjoy the lame Syfy programming (we're to Leprechaun now, how appropriate), hug that man of mine as close as I can, kiss his lips and remind him how much I love him - even if he's heard it a million times before.

You know, the WHOLE week hasn't sucked.  On Monday, my boss brought me two "Kiss Me I'm Irish" Mardi-Gras-esque necklaces, two shamrock-laden rubber duckies, and 3/4 of a dozen cupcakes.  And I've run 3 out of 4 days this week.  And Jimi and I cleaned the kitchen together and cuddled and he played lots of music.  And I spent hours with Kimmie last night, and as sad as the undertones of the evening were, we had a good time.  Here's proof: 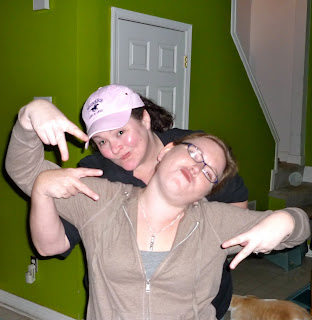 We're ridiculous.  And awesome.
Life can be so happy and good.
These boring thoughts brought to you by Natalie at 11:23 PM

Email ThisBlogThis!Share to TwitterShare to FacebookShare to Pinterest
Labels: Brother, friendship, happy, Jimi, KIM, love, things that scare me, This is why I say "Fuck"