I think my scale is a broken liar.

Today it says I'm back to where I was Friday, down 4.4 pounds for the week.  Of course, 20 minutes later, it added on another pound, but I'll be damned if I'm claiming that extra pound.  I'm trying now to decide if the scale was lying yesterday or if it's lying today.  I'm guessing my bad choices and over indulgence last night are coming back to haunt me, which is why the numbers moved up instead of down this morning.

Oh well.  Today's a new day.  And my inches shrunk - not by much, but enough to make me not drown my scale-related sorrows in a tub of ice cream.

And for the record, I didn't do THAT badly yesterday - I was very good at the fair and only had half a corn dog and an ear of roasted corn (no butter, no salt - not because I was depriving myself, but because that's the way I always eat corn on the cob).  But...I thought all the walking I did and my good behavior for the week justified a splurge of fast food calories for dinner.  And then I made chocolate-covered frozen banana bites and ate a few more than I probably should've.  Bad Natalie!  Bad!

Oh well.  Now I know what a bad idea that was and I won't make the same mistake again.  And today's yard-mowing day...do you know how many calories are waiting to be burned in my 3/4 acre lot?  A whole freakin' bunch, that's how many.

I'm going to have to mow around this, though: 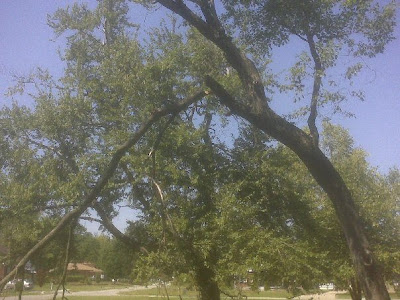 I'm not sure what happened - it was fine Friday night, but this is what it looked like Saturday morning.  No storms or hurricanes or tornadoes rolled through - I guess it was just this branch's time to go.  Our good friend Steve happens to be an Arborist, and he's kindly offered to come over today and help make the problem go away, which is awesome because I hear tree people are very expensive.
In other non-fat-related news, Jimi bought me a new pair of shoes yesterday.  He does that about twice a year, because he's a shoe whore and I am the opposite - I will wear a pair of shoes every single day until they are falling apart around my feet.  So he bought me new shoes, with the logic that if I have several pairs of athletic shoes to choose from, I won't wear the same pair every single day and completely ruin them.  (Secretly, I think he was just itching to spend some money - the tax-credit check for the house (the one we closed on almost 2 years ago) finally arrived this past week.  Also, all shoes were buy one, get one half off, and he was already buying a pair for him, so you know, he had to buy a second pair.  HAD to.)
Today's Comment Love Day over at FTLOB.

I'm going to go say hi to some new blogs, and then I'm gonna walk the dog and earn some extra calories for the day.  Happy Sunday!
These boring thoughts brought to you by Natalie at 7:51 AM

Email ThisBlogThis!Share to TwitterShare to FacebookShare to Pinterest
Labels: Getting Not-Fat, House, Jimi