I logged onto my retirement account last night and learned that I've made $1600 in the last 3 months.  Woot!  For the entire first year I'd been contributing to my 401k, my funds were stagnant in the general trust account - the plan administrator had never allocated the money into the stocks and funds I'd selected upon enrollment.  It wasn't until I received my 4th quarterly statement with no real change that I realized my money was not working for me.  I did some digging, learned of the error, and immediately got online to move some shit around.  Looks like I've done good - I wish I'd paid more attention sooner.

We've had a good weekend, full of happy and love and relaxation.  Friday night we split tacos and chicken nachos at the Mexican joint up the road, then, in an unusual burst of trying-to-be-a-good-girlfriend-ness, we spent an hour walking around Big Lots.  (Jimi loves to shop.  I love to sit on my ass - which is why this counts as a random act of kindness.) Baby bought me a Wahl personal trimmer.  I'm the one that picked it up and said I'd like to have it, but I still feel like his insistence that he pay for it means he thinks I need it. And I do, but still - I don't want him to imply it.  You know what I mean, don't you?  This is why men say we're crazy.

Last night we had dinner and a ridiculous amount of dessert at Stacy & Jessie's.  Stacy made an amazing dinner of filets with an onion/garlic/cream/wine pan sauce, and then followed it up with chocolate and white chocolate dipped strawberries, bananas, oranges, apples...it was out of this world.  Jimi and I had taken the fixings for marshmallow treats made with Chocolate Cheerios...which we topped with the chocolate left over after all the fruit had been dipped.  We didn't head for home until after 1 a.m. - and considering all the chocolate we ate, it's no wonder we didn't make it to bed until after 3.

It's been a weekend of good breakfasts.  I made biscuits, bacon, and fried apples with butter and cinnamon this morning.  Yesterday, Jimi broke in our new waffle iron with a from-scratch recipe that required beating egg whites into stiff peaks before they were folded into the batter - I guess to make the waffles fluffy and light.  Jimi, it seems, had never before beaten egg whites into stiff peaks, and thus did not understand that using a mixing bowl and a fork was not the preferred method - but not until he'd been beating the egg whites with a fork for seven or so minutes.  And thought his shoulder was maybe going to fall off.  My first reaction to his request that I take over was "Baby what are you doing?  That's why God made immersion blenders!" and then I took over the mixing bowl and fork until I thought maybe my shoulder was going to fall off and we said "good enough" and folded the nearly-stiff peaks into the batter.  The results were delicious: 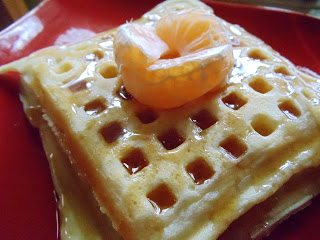 Now Jimi's in there making some sort of awesome stew/pot roast thing with onions and garlic and butter and tomatoes and a rump roast his sister gave us - it'll be delicious.  Oh!  And somehow I'd forgotten, but we made cherry-rum-vanilla ice cream yesterday.  That will be a nice follow-up to the meat.
I sure do talk about food a lot.
Something I think about almost as often as I think about food is babies, and what fate has in store for me, and my desire to have one.  And I've also been thinking a lot about things that I wasn't thinking about so much a month ago - things like money, and how much babies cost, and how much I don't have.  I admit, I lost site of that fact there for a minute or month or so.  And I'm still the most selfish person I know.  And I'm not completely sure I want to give that up 100%.  I'm such a flake.
I want a baby, I do.  I want an amazing, beautiful, perfect little miracle made with love that has Jimi's kindness and spirit and my optimism and lightheartedness.  I want to grow and nurture that baby into a curious, imaginative child full of questions and a new view of the world.  I want to teach and watch our child grow to be a good person, a responsible person.  But, honestly, I don't want to try.  I don't want to chart my ovulation or temperature every month.  I don't want to take the spontaneity and fun out of sex - I don't want to feel like our romantic gestures need to center around a certain date on the calendar.  I don't want to feel anxious if we're too tired or guilty if we both feel sexiest a few days too early or too late to hit that little target.  I don't want to set myself up for failure - I said it before and I'll say it again - I'm not emotionally strong enough to try for months and months and months and have no success and then to follow that road to a point where I'd have a new adjective to add to my blog title and labels.  I can't face infertility right now, and if it is in fact my reality, I'd rather ignore it and just not know.
And I keep reminding myself that one miscarriage does not mean I'm infertile.  Hell, if nothing else, it should assure me that I can, at the very least, get knocked up.  But I fear the worst, and so my mind goes to the worst place immediately, and living with that fear in my heart, day after day, is something I just can't do.  It's too hard, it's too scary, it's too sad.
So here's what we're going to do:  We, Jimi and I, are going to live our lives the way we lived our lives before September 2010; before the positive pregnancy test, before the miscarriage, before my hormones sent me into a biological clock tailspin.  We're going to fuck when we're feeling frisky, calendars and ovulation calculators and luteal phases be damned.  And yeah, maybe I'll pay a little more attention in the middle of my cycle to try to make sure my legs are smooth and my personal trimmer has been put to good use and that I'm extra nice to my man, and that I remind him of how sexy I think he is.  And if a baby is something we're meant to have, eventually, we will.  And if we don't, I'll stay focused on all the things I love about my life, without a baby, and remind myself every now and again that I already have so much happy in my life.
And I'm sorry I lured you in with talk of food and then threw that on ya.  My bad.
These boring thoughts brought to you by Natalie at 5:13 PM