Can you read it?

I ♥ Jimi
On our way to Rick's Friday night, we had this great view of the moon just coming up behind some steam stacks over by UofL, so we pulled into the parking lot of this corner/liquor store to try to get a picture or two.  The moon pictures didn't come out so good (I still haven't read my manual or used the CD that came with the camera, so I still don't know how to use it too good), but I thought this panoramic shot of my high-school-flashback snow art was pretty cool. 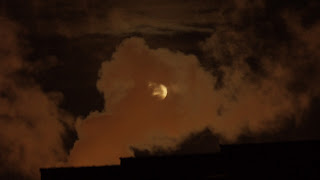 (The least crappy two of the 50 or so moon photos we attempted.) 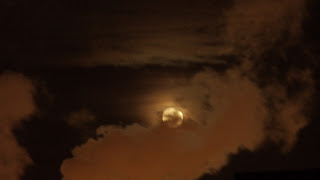 Yesterday, I picked up Megan and we met Melinda and Gary at Iceland for part of Gary's birthday weekend celebration.  Ice skating is so much fun, but OMG it's so hard.  My toes were numb almost immediately upon lacing my skates, but I figured it was from the cold and dealt with it.  It's not like I expected a trip to the ice rink for the first time in ?a half dozen? years to be painless.  I did pretty good on the ice - I only fell once, and that was when I was showing off my ~sometimes/sorta~ ability to spin around fast in a really sloppy version of that finishing move you see the professionals make look easy, so I deserved the bruised knees.  We skated for an hour or so, and I counted that as my exercise for Friday and Saturday, as I did nothing remotely physical on Friday.  Here's a picture of my butt:

I thought the numbness in my toes was from the cold, but within moments of unlacing and removing my skates, pins and needles were coursing through the outsides of my feet - the parts that had been numb, not from cold, it appears, but because the skate was too effing tight.  My socks were too thick.  Or the skate needed to be a bigger size.  Or my feet have gotten super wide, when they've always been super narrow.  Or I have developed diabetes.  (I shouldn't joke about that.  I'm pretty sure it's in the cards for my future.)
This morning we woke up early and went into cleaning mode, Jimi in the kitchen, me in the TV room - the bedroom was mostly done once the laundry was carted to the basement.  (My laundry room is still picked up and stuff - promise.  We're doing a good job keeping up with the washing, and things are getting folded/hung up as soon as it comes from the dryer.  Simple things, I know, but it's an improvement in our world.  :)  )  After the largest portion of our chores had been knocked out, we went out for lunch and to pick up necessities at the Sam's Club.  I got some fancy mixed nuts with no peanuts.  That makes me happy.
I've kept up with the exercising for a few days now, and it's not much, but it's better than normal, and that's a good start.  It feels good.  It's easy to breathe.  I like the way my skin looks after I've been sweating and exerting myself.  I watched my feet as I ran on the treadmill tonight, and I couldn't help getting a good look at my belly.  It is what kept me going even after I started to get tired and knew I could stop five minutes short, or when I started thinking I could skip that part at the end where I took Finn outside for a short jaunt.  I'm going to lose this shit, and the next time I see my stomach sticking out like that better be because there's a baby in there.  I'm just sayin'.  Oh, and I'm not wearing that bright pink fleece to exercise in anymore until i lose the fat - it works like an effing highlighter on my pudge.
With that said, we're having fried chicken for dinner tonight.  I've obviously not put myself on a diet, and for now, I won't.  I'm trying to make healthier choices more often, and to add more fruits and vegetables to my diet (like the edamame that will accompany my keel tonight), but I haven't gotten to the point where I'm willing to count calories or deny myself things too terribly often.  I understand that the Natalie in this paragraph sounds different from the Natalie in that last one, but hey, welcome to my world!  At least I exercised.
I'm talking about food because I'm starving.  Jimi has to go get the dinner, though, and he's watching Afro Samurai.  I'm not sure of the full gist of the story, but this dude has a sword and kills a whole bunch of people and smokes dope and it's got foul language and lots of gore - basically, it's not my sort of thing at all, and I pretty much hate it.  But, household rule is whoever doesn't have the computer controls the remote, so we watch a lot of crazy shit that I'd never know exists if it weren't for that dear sweet man of mine.
That's all I've got.  Have a great night, and I hope your week doesn't suck.
These boring thoughts brought to you by Natalie at 6:44 PM