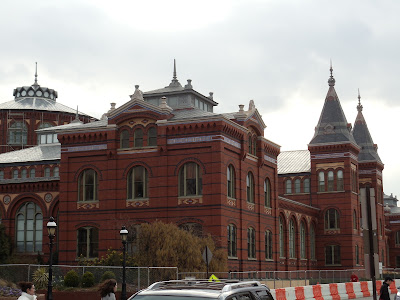 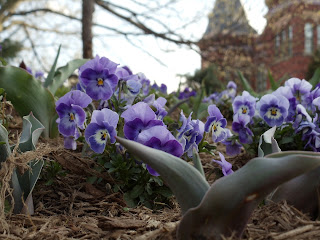 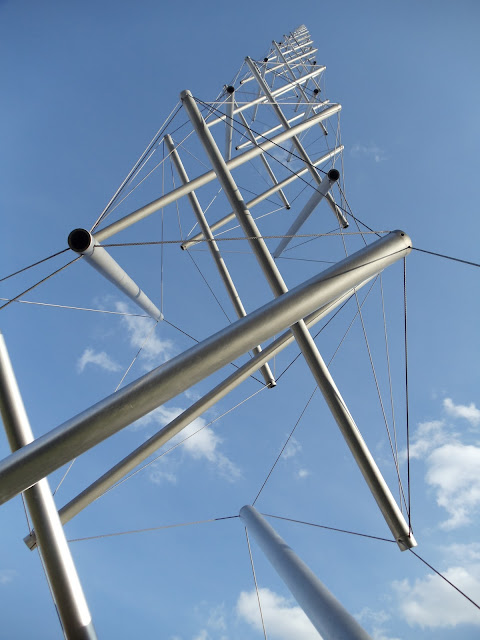 I love these shots, and I'm going to blow them up and hang them on my walls. 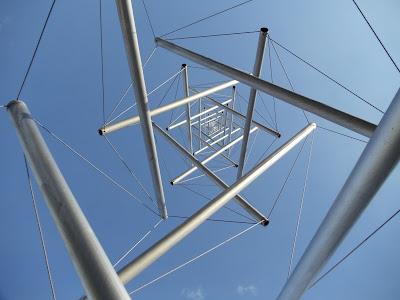 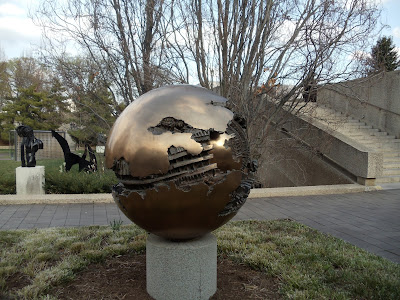 This picture tells a story.
Okay, so I confess - since our Metro ride I'd felt like a jerk for not giving the homeless dude some money.  I know Jimi gave the guy five bucks, but I felt like I should've probably done something more than just limply say (cue high-pitched whiny voice) "I don't have any change" like a bitch.  It was weighing on my conscience. Heavy.
We'd walked back Mall-side and come upon this recessed sculpture garden.  On our way in, we passed the man you may have spotted in the upper right-hand corner of the picture up there.  Do you see him at the top of the stairs? 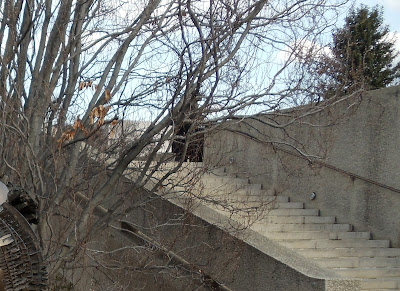 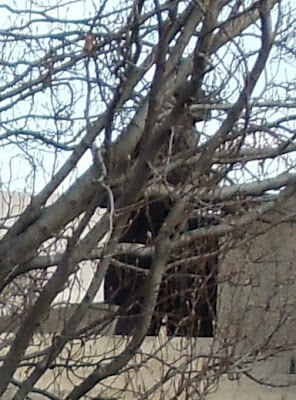 Can you see him now?
He's the sort of guy that sticks out like a sore thumb, but manages to blend in so completely with the scenery that most walk right past him, not seeing or refusing to see, not looking but staring out of the corner of their eyes, giving a wide berth without slowing, lest he feel inclined to speak to them.
He was eating out of a styrofoam to-go container, but I got the impression maybe he'd pulled it from the trash can that served as his dining table this evening.  He was wearing two different shoes, one a sneaker, one a man's dress loafer.  His clothes were filthy and layered and torn, but there were a lot of them and he seemed warm enough.  Warmer than I felt, at least.  He had at least two coats, the outer one a long trench.
We walked past him and down the stairs as he was having his meal, and my heart clenched in my chest.  We looked at a statue, a sculpture that represented humanity, and the ridiculousness of THAT, in the face of HIM, it punched me in the face.  I turned and looked back up at the homeless man.  He was pulling newspaper out of the garbage, smoothing them, folding them, settling down again at his makeshift table to read his evening news.
I couldn't do this.
I hollered ahead at Jimi, who hadn't noticed my angst and had continued on, and I trotted up the stairs, a wad of bills clenched in my hand in my pocket.
He was huddled over top of the paper, a pile of standing rags hiding skin so weathered and worn it blended right in with the fabric.
"Excuse me," I nearly whispered.  Nothing.  No movement.
A little louder "Excuse me?"  Again, nothing.  I cleared my throat and repeated my query.  More of the same.
This is dumb, I thought.  "Excuse me, sir."  I spoke clearly and firmly, but not unkindly.  The man startled, and his eyes met mine - he was ageless, with lines and scars that could've made him 35 or 300.  Immediately, before I spoke another word, before I'd made my intentions clear, he returned my tentative smile with a wide-mouthed gaping grin, spread from ear to ear, and those eyes that were still on mine lit up with a kind light.  I counted three teeth, each in a different stage of decay.  Still, his smile was so good, so sweet, so trusting.
"If I'm not being too presumptuous," I said, pulling my hand out of my pocket to offer him the bills, "May I please offer you a few dollars toward your next meal?"
He continued to smile at me, and as if it were the most normal thing in the world for a stranger to approach him with cash, he said, "Yes, you may.  Thank you," and met my hand for the exchange and the moment was over.
I walked back down the stairs to meet Jimi, and by the time I'd turned back, the man was gone.
I hope he had something made-to-order.
These boring thoughts brought to you by Natalie at 7:41 AM

Email ThisBlogThis!Share to TwitterShare to FacebookShare to Pinterest
Labels: A Year In Photos, for the future, happy, karma, love, My Blog Is Boring, Photos, vacation