We drove all day Thursday, and then Jimi stayed up talking to his brother until the wee hours of the morning, so our start Friday was slow-going.  That's the beauty of vacation, though - no schedules, no time-tables, certainly no alarms.  We had breakfast at the Denny's, because I was craving pancakes and bacon and hashbrowns, then went back to the house to get cleaned up so we could drive up to the city and see what we could see.

For some reason, I'd gotten it in my head that the nearest Metro Park 'n Ride station was 20 miles from Jimi's brother's house.  I was way wrong - it was 60 miles.  D'oh.  Still, to not have to actually drive in the city, then wander in circles for an hour or three looking for a parking spot, it was well worth the $4.50 per day parking rate.  The Metro is my all-time favorite form of public transportation...not that I've sampled a large variety of public transit, but there's nothing intimidating about it.  Our local bus system, TARC, is awesome, but using TARC can be confusing if you're trying to get across town.  The Metro uses huge color-coded maps that are posted everywhere, making it nearly idiot-proof to go from one end of the city to the other. 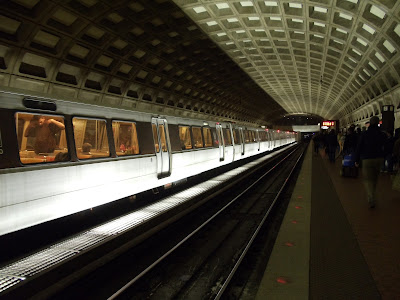 And the people watching!  Holy smokes, the people riding the Metro are just so awesome.  One of these days, I'm going to get a day pass and just ride the trains all day, watching the people who get on and off.  The tourists are everywhere, of course, but so are the Lt. Colonels on their way home from a day working at the Pentagon.  Businessmen and women in sharp suits and shoes I only ever see on television or in magazines, because (cue hick accent) they ain't got them stores in Kentucky.  Single mothers with double strollers holding a pair of twins with very different personalities.  Huge afros and awesome mullets, scarlet and saffron robes of monks and brightly colored saris worn by Indian women with thick braids and *gasp* sandals?!  It's 40 degrees outside!!

The whole city's like that, of course.  It's just one huge melting pot.  We heard dozens of languages.  I love it.

A homeless guy got on the train at one of the early stops - I had a feeling.  I was right.  I went to put my arm around Jimi's shoulder and bumped the man's hand; he was reaching out to tap Jimi on the shoulder.  I swear, it's like we wear signs or something.  "Ask me for money, I never say no."

"Excuse me, sir," he scratched out in his (very cliche', if you ask me) scratchy, slurred, maybe-he's-not-drunk-now-but-he-probably-will-be-soon voice.  "Do you have sistyfie snent I cud barry to git sum buzz fare?"

I had money, but it was all twenties in a wad in my wallet and, while I'm pretty naive and green, even I know it's not such a good idea to pull out a big wad of cash in the middle of a crowded public place, so I said, "I don't have any change," even though the guy wasn't asking me for money.  This was my way of telling Jimi "I don't have anything small and I'm not giving this guy a twenty."  I knew baby'd come through - he gave the guy a five and told him to have a nice day.  We all leaned back in our respective seats and felt better about ourselves.

When the guy's stop came, he exited the train, but stopped to tap on the window next to our seats, smiling and waving.

"You made his day," I said to my beloved.

"Best five bucks I've spent all day," was his reply. 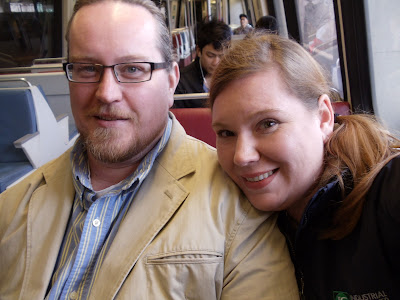 <-- That's my happy face.
These boring thoughts brought to you by Natalie at 11:15 AM

Email ThisBlogThis!Share to TwitterShare to FacebookShare to Pinterest
Labels: A Year In Photos, for the future, happy, Jimi, karma, love, My Blog Is Boring, Photos, Shit Jimi Says, vacation