My Notie Kari at Know-It-Not-So-Much is pretty special, and not in a short-bus way.  She's funny and spunky and sincere and kind.  She's a voracious reader, and one heck of book-reviewer, too.  She takes and shares the prettiest pictures.  Her daughter is so adorable, I just want to squeeze her little cheeks.  She paints pictures of her world with her words, and I love catching up on her life in California (it always sounds so much sunnier than Kentucky!), and I can't wait to read all about her newest bundle of joy, due to arrive in a few short months.  I love ya, Notie!

Kari has bestowed upon me a very special honor - 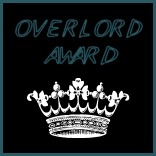 Whoa.  This means I'm the boss of everything.  I get to make three rules, any three rules I want, no matter what.

(Minute Man's Wife, who bestowed the award on Kari, she made a rule that everyone who eats at a restaurant that uses real silverware must add an extra dollar to their final bill, and that dollar goes to the local food bank to help feed someone in need.  If the restaurant uses cloth napkins, $2 is added.  I love this rule so much I'm trying to come up with a way to get a movement started here in Louisville.  I mean, seriously, what a freaking brilliant idea!  Ixy at Illusion made a rule that ice cream calories evaporate overnight and never cause any ill-effects.  I need that to be true.)

1.  For the next 30 days, without telling anyone, we're going to completely re-write our system of doing things here in the good ol' U S of A.  All of a sudden, today, everyone who lives in the United States is a citizen.  Okay?  We're starting fresh.  Oh, and we all have equal rights and shit too, like we're taught to believe when we're little kids.  Maybe this way our children won't grow up and have that "what in the FUCK?!" moment we all did when we realized that "land of the free" thing mostly only applied to rich white men.  All those immigrants in town to pick the avocados we all want to buy at the grocery for less than $2 each (which, by the way, we're able to do because those fellas (and women, and children) are willing to work their asses off for near-slave-labor wages, but whatever), they all are now, immediately, a full fledged member of this American Dream.  I find this only appropriate, seeing as how they're only here because they're trying to live that Dream we all keep talking about while we're sitting on our fat asses watching Real Housewives of Bitchville and Jersey Shore.  And gays can vote and get married and have jobs, too.  And we're going to go back to that "freedom of religion" thing and make sure that Separation of Church and State thing is adhered to.  The laws of the land will be based on values such as "not being a dick" and held to such moral tests as "will this help or harm my fellow man?"  We're waving our magic wand and all of a sudden the Middle East is calm and collected and our troops are coming home and we're funneling all those extra billions toward schools and the underprivileged and our smallest debts first, then the next one, then the next one, just like Dave Ramsey says and we're going to fix our credit rating and Save Teh Babbies too!   You with me so far?

2.  (Okay, so number one may have technically counted as at least three rules, but I'm making the rules here, so shut it.)  You know the war on drugs?  We're de-funding that shit.  We're refocusing that money and we're calling it the "War on Cancer" and we're going to eradicate that fucking bastard.

3.  Wait!  Hear me out - it's totally okay to de-fund the war on drugs because we've legalized the good shit and convinced everyone how awful the bad shit is and the people who were addicted have been through  treatment programs that made them realize they have better options and everyone lives in a world full of kittens and rainbows and unicorns.

There.  Those are my rules.  Today.  I'll change my rules and come up with better ones as soon as I hit "Publish Post", but whatev.

And now to pass the power along...

To Kimmie at Nothing To See Here.  I work with her.  She's my of my nearest and dearest BFFs.  She gave me a place to live when I didn't have anywhere but Momma & Daddy's to go.  And she's just recently started blogging and needs some new friends.  And she needs to make some rules.

To Kiley at We Were Going to be Queens.  Go back and read forward - it's like watching her become who she is.  I don't know her, but I'm a total blog-stalking fan.

To Chubby McGee, because I love her and it's totally her turn to make some rules up in here.  The universe owes her.

To Patty at Another Cookie, Please!.  She's smart and sassy and I think I could live in a world where she's makin' the rules.

To Carlia at The Stork Drop Zone.  She'll use her power for good and make the world better for us all, I can feel it!

To Sushigirl at Just us and the cat, because in a world full of things she can't control, here's something that she can.  :)

Happy Thursday, people!  (Is it Friday yet?)
These boring thoughts brought to you by Natalie at 7:02 AM