I went to Chicago today, what did you do?

And can I just say, 4:30 is way too fucking early to wake up.  (Unless you're just waking up to pee and can go straight back to sleep, that's okay.)

I wore the wrong shoes.  WAY wrong.  Knee-high boots with a 4 inch heel wrong.  Fuck me, what was I thinking?  I've not flown since January 2006, and I managed to forget in 5 years that the concourses between gate and parking garage are 5 miles long.   It wasn't bad the first five miles, in Louisville - my feet were still sleeping, I think; after all, it was only 5:30 in the morning.  But when we landed at Midway, and I was chasing behind my 6'5" bossman, I started to feel the burn - literally...it felt like the balls of my feet were being poked with hundreds of hot needles every step I took.  I started hoping our appointments wouldn't require facility tours.

We got our rental and quickly realized our first appointment wasn't an hour north of the airport as bossman had believed - it was "15" minutes away in downtown Chicago.  Our appointment was set for 10 a.m.; current local time was 6:50 a.m.  We had time for breakfast.  (And a lot of time to kill, but I was hungry, so breakfast was my only real concern, other than the ache that was starting in the arch of my left foot.)

Bossman has been to Chicago a lot, and as we approached the city he talked of its history and distinctiveness with the familiarity of one who knows his way around.  But, I soon learned, there was a kink in the system - the GPS Lady.  She got us to the heart of the city via whatever expressway that was, but once we were among the tall tall buildings, she lost her triangulated satellite signals and, thus, lost her reliability. Bossman, however, is apparently a very trusting soul - as demonstrated by him circling our destination no less than three times, spewing a steady stream of curses toward GPS Lady as she shouted back "RECALCULATING! RECALCULATING!"  My favorite circle, though, was the last one - we realized our error and KNEW we needed to take the next three rights and we'd arrive at our destination.  As we approached the second turn (Wacker Avenue, for the record), GPS Lady suddenly barks "RECALCULATING!" and changes the purple line we're supposed to be following right onto Wacker into a straight line across Wacker.  Bossman screams "FUCK!  WHAT THE FUCK!  IT JUST CHANGED!!!  DID YOU SEE THAT?  IT CHANGED!!!" as he drives straight across Wacker, as per the new, unreliable, non-triangulated instructions from that lying bitch GPS Lady. 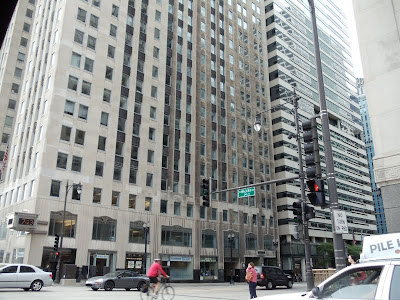 "What the fuck, Bossman?!," I ask politely as my stomach finishes eating its own lining in protest of the fact that we've just, again, extended our hunt for food.  "You KNEW you needed to go right!  Why did you stay straight?  YOU KNOW SHE'S A LYING BITCH!!!" 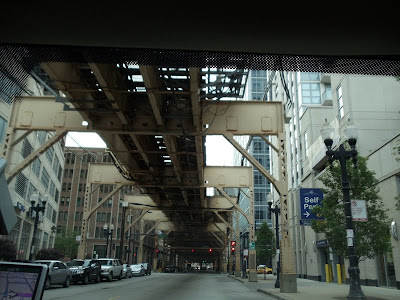 GPS Lady there in the lower left corner 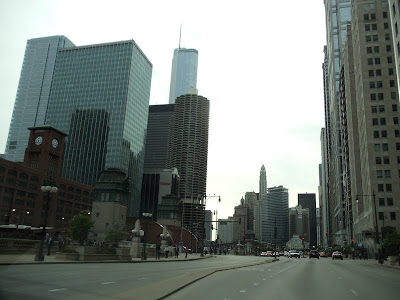 Chicago has lots of tall buildings.
We did not eat here. 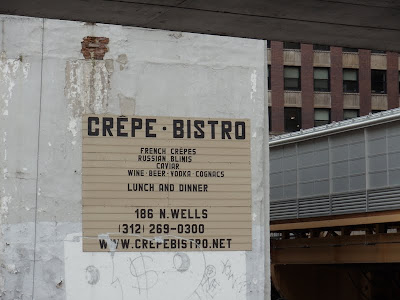 We did eventually find our destination, and secure parking, and feed my belly.  And then we sat there bullshitting for an hour and a half while we waited for 9:45 to arrive so we could go upstairs and present ourselves to our potential customer.  That hour and a half gave me a good opportunity to question my right to call myself a woman, as women who exuded sexy and class and style traipsed past me in their sharp heels and powerful business suits.  I really need to learn to dress better, is what I kept thinking.  I need to try harder.  I felt frumpy.  Blech.

Our meeting went well after a rocky start - you could tell she wasn't excited to see us, but she warmed up eventually.  Afterward, we had hours before our next appointment - Bossman offered to drive around the city a bit and show me a few sights.  We briefly discussed lunch, but breakfast hadn't been too long before and neither of us was hungry just yet.  We drove uptown and then down Michigan Avenue, over to Lake Shore Drive, and decided to stop and talk a short walk along Navy Pier.  Walking, you say?  But Natalie, I thought you said your feet hurt?  Why yes, yes I did say that didn't I?  I remembered, Bossman did not.  I didn't want to be a spoil sport, and I wanted to see the sights, and I figured surely someone would be selling flip flops near the entrance...so we parked the car and off we went.


As Seen On Married With Children: 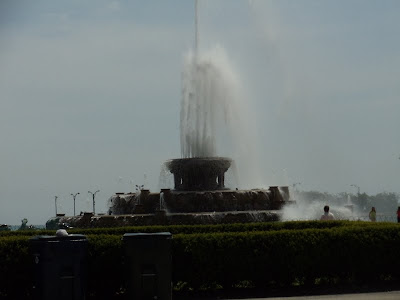 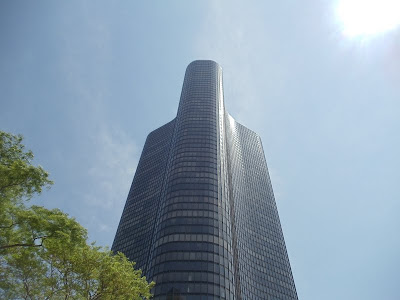 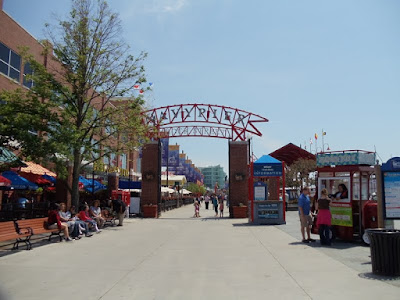 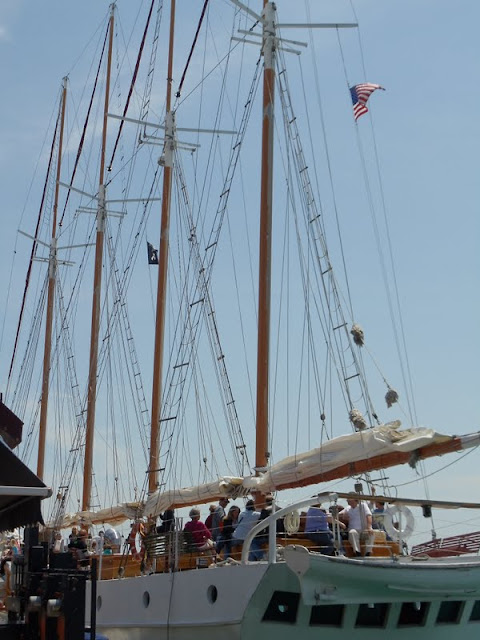 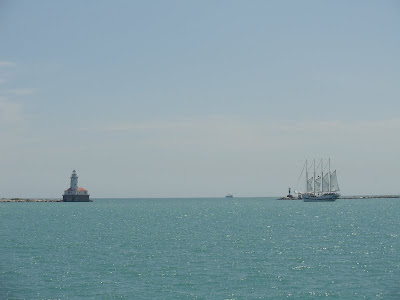 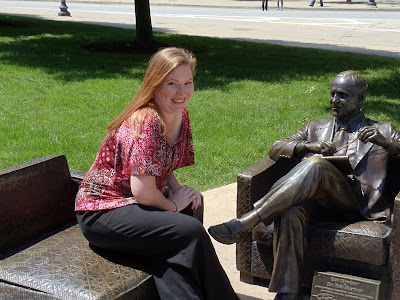 Bob Newhart and I discussed my Frump.
He was nice about it. 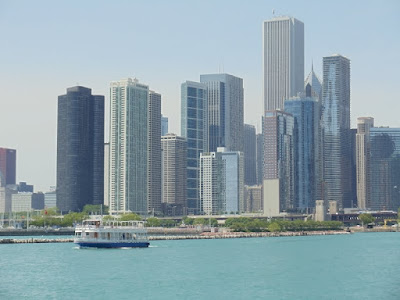 If you ever find yourself in Chicago, in horribly uncomfortable shoes, with someone who suggests a walk on Navy Pier, and you think "Hmm...I'll bet they sell comfortable shoes right there at the entrance to Navy Pier" before you say "Sure, let's go for a walk", well, let me save you some trouble - they don't sell shoes at the entrance of the Navy Pier.  And you need to look closely into the dark windows of the building on the left - there are shops in there and two of them sell shoes - but the store at the end of the Pier that I went into first because I didn't see the other two stores, that one doesn't sell flip flops.  The point of the story is that I did eventually find a pair of flip flops, and they are cute, as they have a pirate theme to them.  The point is most definitely not that I paid $20 for a pair of pirate flip flops.

I got to wear the flip flops from about the middle of Navy Pier back to the rental car, and then for the half hour drive to our next appointment - but then the boots of torture were back on the scene.  "If they offer us a tour, can we please politely decline?," I inquired of bossman as I zipped up my hooker boots in the customer's parking lot.  "They're probably going to want to give us a tour," was his reply.  "Fuck" was all I had to say about that.

There was a tour.  A long one, with big stabby needles digging into me every step of the way.  But it eventually ended, and it was over, and Pirate Flops were back in business.  I didn't even care that my gets-a-pedicure-every-three-weeks bossman was now witnessing my chipped-pink-polish toes - fuck appearances, this was a medical emergency.

We headed back in the direction of Midway at 3 p.m. - our flight was scheduled to leave at 4:45.  "I've been worried about time since we were about halfway down the Pier," bossman confesses.  "It'll be fine," I say in that annoyingly positive attitude of mine.  Then we followed a curve in the road and found the traffic and came to a dead stop.  It was 3:20 and we had five miles before our exit.  "There's no way we're going to make it unless our flight's delayed," said bossman.  "I'm sure they'll hold the flight for us," I replied as I pulled my Blackberry from my purse.  Sure as shit, our flight status was delayed.  Hot dog.  "It's all going to be fine," I grinned. 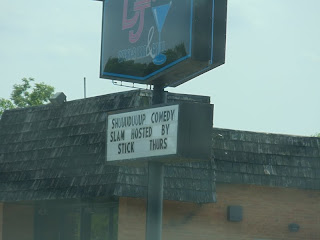 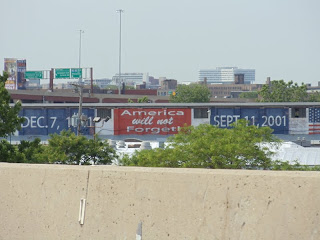 We got off at the next exit and dutifully followed GPS Lady's recalculated directions, which were accurate right up until the end, when she directed us down a residential street for 2 miles when we really should've gone straight and turned directly into the airport.  But we made it with an hour to spare before boarding, and we were convinced we were home free...

And then Homeland Security had to go and get involved.  Have you ever flown from Midway?  There is a wall of people waiting to have their shoes and laptops and purses x-rayed, their bewbies and junk felt with the back of a stranger's hand.  And the line bossman picks is always the slowest - those are his words, not mine.  For some reason, I left the line I chose to get into the line he picked...and for the next half hour, we watched every other line move forward while our line stood still.  Our TSA guy, I'm pretty sure it was his first day.  That, or he let a terrorist on a flight last week and now they're watching him super close.  This is how it went going from our line to the actual screening area:

Hand TSA dude ID and boarding pass.
He stares at ID for a full three seconds.
Looks at you.
Pause for a full second.
"How are you today?"
searches your eyes for some hidden message that says "I'm going to blow up a plane today!",
doesn't find it,
looks back ID for full three seconds.
Looks over to the boarding pass.
Stamp.
Back at you with a look that says "I didn't catch you this time, but one of these days..." while his mouth says "have a nice flight".

It was a little creepy.  And did you know Homeland Security wants us to buy shoes from Zappo's?  It's true.  The advertisements in the bottom of the stuff-to-be-x-rayed trays told me so.

We made it to our gate, found our spot in line near the appropriately numbered pole (in the front, thanks to bossman ponying up the extra $15 per ticket), and promptly, as if they really had been awaiting our arrival, they announced our flight was ready to board.  How's that for timing? 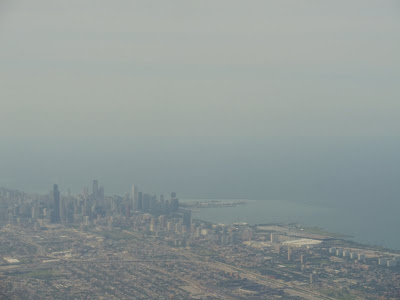 Our return flight was uneventful, and I was back in baby's arms before 8 o'clock.  And my feet hurt so bad, but I'm soaking them in hot water in a big ol' gray rubbermaid tote because I ain't got one of them faincy foot bath thingamabobbers and Jimi swears this will make them all better and Jimi's usually right about everything and it feels so good so I'm going with it.  Did I mention I got up at 4:30?  I'm so tired.

G'night friends.  Sweet dreams.
These boring thoughts brought to you by Natalie at 10:54 PM

Email ThisBlogThis!Share to TwitterShare to FacebookShare to Pinterest
Labels: A Year In Photos, Chicago, My Blog Is Boring, My Day in Photos, Photos, road trip, This is why I say "Fuck", work