I bought a pair of pants at Old Navy probably four years ago; size 16 boot-cut navy corduroy with a mid-rise waist and a little notch cut out just under where the belly button goes.  Jimi convinced me I should buy them, but I've never worn them. They fit me like a sausage casing when I brought them home - they buttoned and zipped, but just because you can wear something, doesn't mean you should.  For months they were kept in the bag in which I carried them home; the bag would be tossed from this side of the room to that.  Eventually, the bag was thrown away, but the navy pants stayed folded and tagged, moved from pile to pile until making their way into a drawer.  Then we moved.  The pants found a new home in our new home - on a clothes hanger, in the basement.  There they waited, and there they were forgotten.

These aren't the first pants to have received this treatment at my hands.  I've almost always got at least one item of clothing I'm holding onto because I bought it too small or I "outgrew" it and I just know that I'll eventually fit into it and be super cute and everyone will love me.  I still remember with longing the khaki green button-fly soft jeans I wore to my bridal shower in May 2002 - oh, those pants were so soft and worn and fabulous, and they made my ass POP.  I was skinny then, but just starting on my weight-gaining journey, and I wore those favorite pants of mine weekly, until I couldn't deny the growing muffin top any longer and they began to take on sausage-casing status, and then I retired them to the back of the closet.  I never forgot about them, though, and each time my ex-husband and I moved to a new apartment in a new town, I found those pants and packed them away and promised myself that one day I'd be able to wear them again.  I never wore them again, though - I tossed them out, along with so many of my hopes and dreams, when I was leaving El Paso and my marriage behind.

The navy corduroys, I forgot them until today.  I'm in a sort of awkward in-between stage with my clothing and my weight; while some of my clothes fit better (the smaller-sized stuff I was holding onto with hope), most things are slightly too big and therefore a bit frumpy.  As I was changing out the laundry, I was dressing myself in my mind, trying to think of new combinations or items I've not worn in a while, and I looked over at the things hanging and remembered - "Those pants.  I wonder if they fit now?" 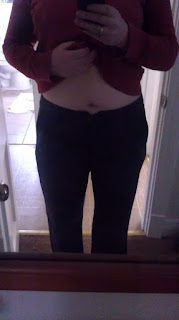 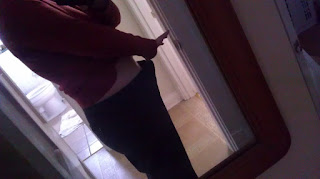 Sorta.
These boring thoughts brought to you by Natalie at 10:27 AM

Email ThisBlogThis!Share to TwitterShare to FacebookShare to Pinterest
Labels: Getting Not-Fat, Note to self